Have you seen this video yet?

If you’re too lazy to watch this video, then you’re probably too lazy to read my blog also, and you’re missing out on an adorable girl with blond curly hair looking at herself in the mirror talking about all the things she likes in her life, her house, her room, her school, her cousins, her hair, her Allisons and she can do anything good, better than anyone.

I was shown this video by one of my guy friends who told me he thinks I look better without makeup. I told him I wasn’t posting the really terrible photos.

This morning I stood in front of my mirror not brushing on makeup or lining my eyes and I thought of Jessica (the little curly haired blond girl), I thought about the supportive comments I’ve had from friends and I started to believe that there might be some truth to them, that there really isn’t as big a difference as I think there is.

I first started dabbling with makeup in high school during my punk rock into raver days. I think mascara came first, followed by silver eyeliner. I was the kind of girl who bought her makeup at The Body Shop because of my stance on animal testing -e xcept for the silver eyeliner, I probably bent my ethics for that. Mostly I focused on my eyes adding shadow, liner and mascara. Then keeping with a natural look into high school I added bronzer instead of blush. That was all I wore until college when I stepped up my look with foundation and powder. I’ve noticed that as I age I’ve become more and more dependent on makeup.

Now I’ve never been the kind of girl to cake on makeup, thankfully my skin’s always been pretty clear, but I noticed over the last year that I was fairly constant with my eyeliner. Which is probably why this no-makeup look is feeling so drastic for me.

As this is day three without the slap I’ve found that I’m becoming more comfortable in my skin. When people look at me I stop telepathically apologizing for my tired face and I can accept that the difference probably isn’t as much as I think it is. Heck, last night I hung out with the boy I’ve been seeing and he’s still talking to me today (he may be a keeper!). I’m starting to realize that this probably isn’t as big a deal as I originally thought. 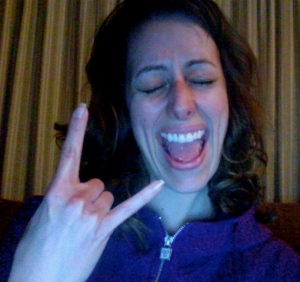 Even after Dance Dance Party Party I'm rocking the no makeup look.