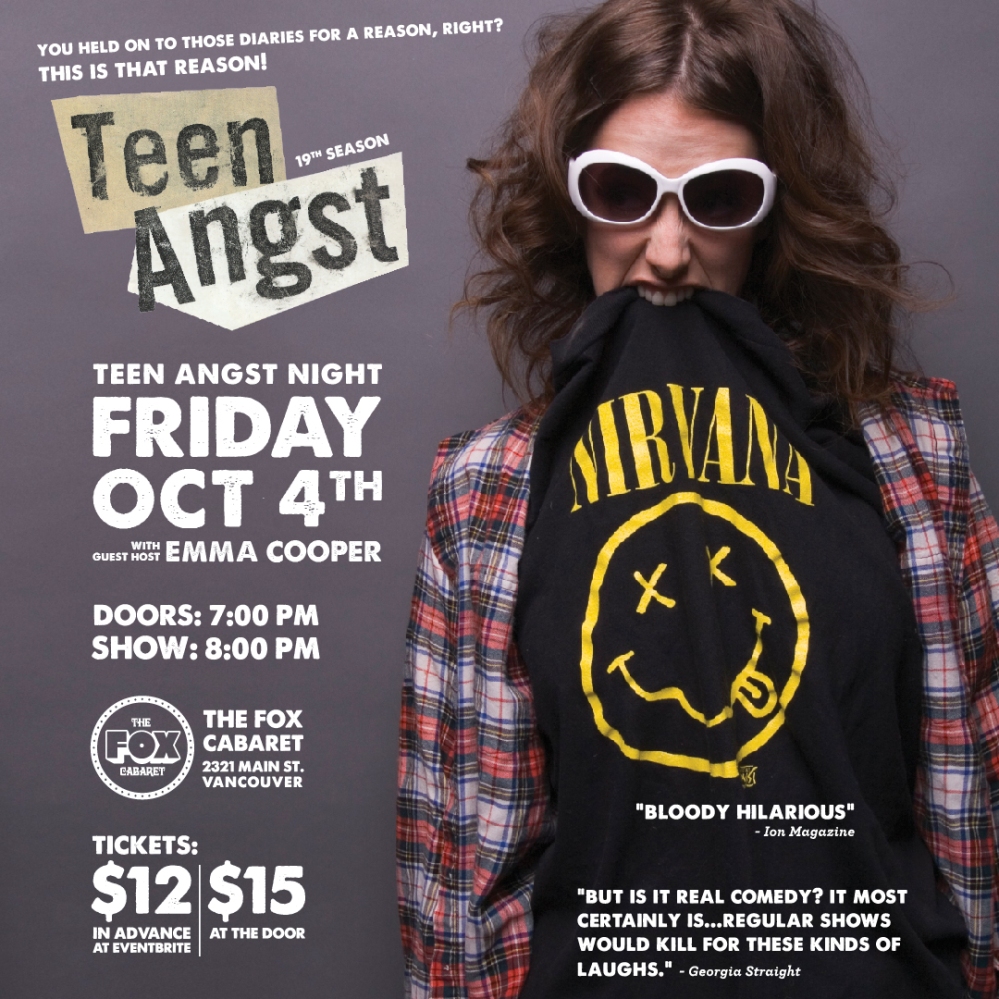 In November of 2000, in Calgary, Alberta, I got a group of people together to celebrate the launch of TeenAngstPoetry.com, a website I created with help from my brother. Several people got up on stage and read from their teenage notebooks. While the website was dedicated to poetry at the event people could share from a variety of teenage creations (journals, letters, songs, short stories etc.), so long as it followed these rules: 1. The work had to be your own. 2. It must have been written between the ages 10-19. & 3. You couldn’t be proud of what you shared.

Teen Angst immediately attracted lots of media attention from CBC Radio to the Globe and Mail. My brother said the website had made it when it was featured on MetaFilter (an early Reddit type site) and they had over a million hits and crashed their home server.

Over the years the show has evolved in format, was turned into an anthology (Teen Angst: A Celebration of Really Bad Poetry, (St. Martin’s Press 2005), a stage show for the High Performance Rodeo 2006, turned into a solo show featured at Bumbershoot 2008, appeared in festivals like Latitude (UK), Vancouver Comedy Festival, Vancouver Poetry Festival and likely inspired a few knock-off shows. The website died years ago but can still be found at the Internet Archive.

This Fall marks the 19th season of Teen Angst Night. It’s not a show anyone ever expected to last this long but as it keeps selling out the Fox Cabaret it shows no signs of slowing down. The root of the show’s success is how the experience of teenage angst is universal.

Tickets are now on sale for the first show of the 19th season of Teen Angst Night!

Since 2016 10-20% of ticket sales gets donated to CLICK – Contributing to the Lives of Inner City Kids. CLICK’s mission is to engage the community by raising funds for programs that support inner city kids so they can succeed.

“But is it real comedy? It most certainly is. People love to laugh and there are many routes to arrive at that destination. Is it traditional? It most certainly is not. It’s not what the average person envisions when they think of comedy. But regular shows would kill for these kinds of laughs.” Georgia Straight

“I like it when the definition of “theatre” gets stretched. That’s what Sara Bynoe’s doing.” … “I gut laughed the whole evening. So did the rest of the audience. It was a full house. It always is. – TJ Dawe in the Charlebois Post