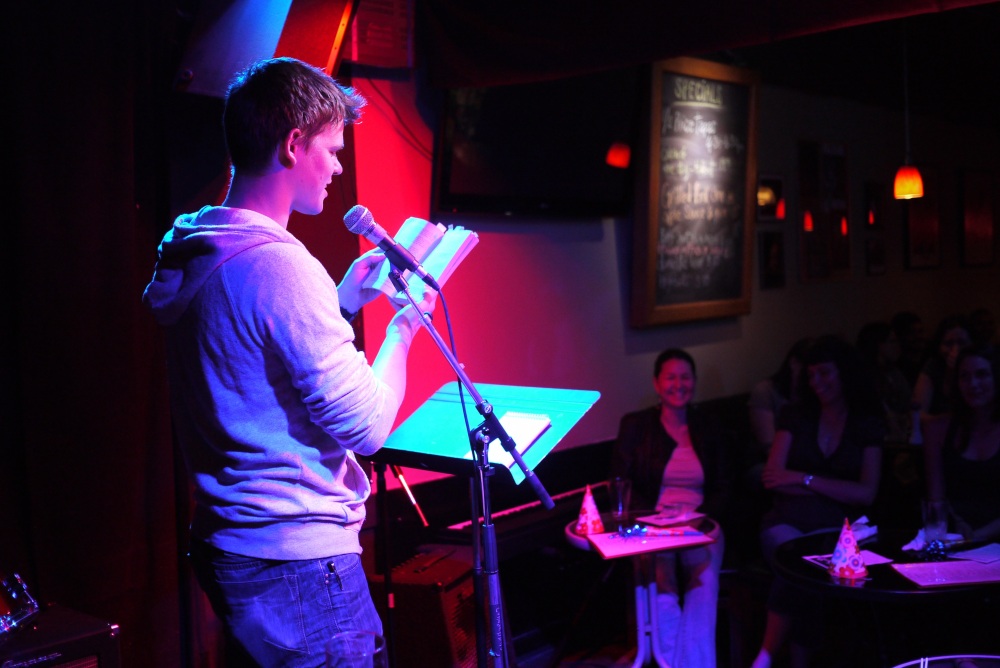 Comedian Ivan Decker reading at a Say Wha?! show in 2011.

It’s November, let’s get cozy and listen to funny people read us about terrible writing. Grab a drink and your favorite people for a laughter-filled evening with me and these people.

Dina Del Bucchia is a writer, book maven and MC, and dress enthusiast who also likes to watch a lot of television. Her first book of poetry, Coping with Emotions and Otters, will be released by Talonbooks in spring 2013.

Comedian Gary Jones is an award-winning playwright and improviser. He currently writes for CBC Radio’s “The Debaters.” He has a column in BC Business Magazine called “Unconventional” in which he attends gatherings at the Vancouver Trade and Convention Centre and makes fun of them. He’s worked with Nick Nolte, Katherine Hepburn and Andre the Seal, one of whom ate a bucket of fish a day.

Tegan Verheul is an actor, writer and comedian from Vancouver. She is a founding member of Vancouver’s finest sketch comedy group, Pump Trolley Comedy. Check out their new show, Pump Trolley Comedy Presents: The End of the World! this Thursday and Friday, 8:30pm at the China Cloud Theatre. You can also see Tegan improvise around town with Ghost Jail Theatre or the charmingly charming  duo Tegan and Sarah. Follower her on twitter @TeganTegan.

Bruce Horak has been N.F.A. for two  and a half years. (No fixed address) His show, “This Is CANCER” – in which he  portrays the disease that took 90% of his  vision – is a darkly comedic cabaret which  has both inspired and offended audiences across the country. Bruce is often mistaken for a sighted  person by people who don’t know him … and even by some who do. He has  painted a series of portraits which  attempt to capture his unique vision  called, “The Way I See it” which will  be shown at the Kelowna Art Gallery,  opening January 11th, 2013. You can check out a sampling of the  portraits at brucehorak.com

ALSO read all about Say Wha?! in INSIDE VANCOUVER.