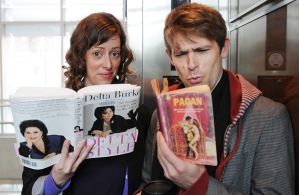 Say Wha?! producer sniffs out work that stinks for actors, poets and dancers to read

He’ll race from dancing in Buddy: The Buddy Holly Story at Granville Street’s Stanley Theatre to mid-Main’s Cottage Bistro to make an appearance at Say Wha?!: Readings of Bad Writing Performed for Your Entertainment, June 8, but Jeff Gladstone couldn’t turn the gig down. He has the perfect material.

It’s a 1963 novel called Pagan–“Her name was Pagan and she lived and loved like one”–and it’s pure gold. As in, pure twisted romance fiction gold.

“It wasn’t explicit but it was kind of filthy,” Gladstone said. “There was this character named Uncle John and she and Uncle John have this disgusting affair.”

Gladstone picked up the paperback along with one about a rye-swilling insurance investigator named Milo March while on a Fringe Festival tour of Ontario in 2003 with his brother and a friend.

The friend, who Gladstone says is half blind so he doesn’t get car sick when he reads on the road, recited the most hilarious parts while Gladstone and his brother fought over who would get to keep Pagan and Milo. His brother got Milo.

When Sara Bynoe, Say Wha?!’s producer and host, found a ghastly written romance novel titled Dark Avenger at a U.K. hostel, she knew she had to hold onto it and bring it back to Canada. Somehow, it would be put to good use.

“After [a couple has] sex one time she says, ‘She clung to his hair until the paroxysms slowly subsided,'” Bynoe said. “What? Who talks like that? Clearly you use a thesaurus.”

The purple-prose riddled book inspired catchphrases that she and her friends threw around all weekend.

“It’s a bit of a rape fantasy,” Bynoe said of the book that has one man determined to get someone’s sister pregnant out of revenge.

“[That] you can’t make this shit up is one of the major appeals to it,” Bynoe said.

You not only can make this stuff up, but also get it published.

That novel, as well as a New York City comedic reading series called Celebrity Autobiography, and a live U.K. show called Who Writes this Crap? inspired Bynoe to produce and host Say Wha?!

She’s booked a burlesque dancer, a slam poet, comedians and actors, including Gladstone, to emote at the Cottage Bistro. Some of the artists she’s entreated to read are too busy to find their own material, so Bynoe’s been sniffing out works that stink.

When she told a librarian she was looking for horrendously bad books, Snoop Dogg’s Love Don’t Live Here No More immediately spilled from her lips.

Bynoe has been searching for the 1970s self-help book The Sensuous Man and she may ask someone to read from one of Pamela Anderson’s novels, particularly a thinly veiled autobiography that highlights sexual encounters every 10 pages.

But Say Wha?! won’t be all romance and smut. Actor and improviser Lauren Martin will read from an astrology book and slam poet Ms Spelt will read from Sarah Palin’s 2009 autobiography Going Rogue: An American Life.

“Can-con” could be delivered in the form of Geraldo Rivera’s 1991 memoir Exposing Myself, which includes a section about his affair with Maggie Trudeau, or if the event becomes a series, Bynoe might save that for a Canadian-themed night.

Other readers include Paul Anthony, an actor and comedian and host of Talent Time at the Biltmore, comedian and writer Morgan Brayton, actors and improvisers Denise Jones, Riel Hahn and Toby Berner, performer and burlesque dancer Jenny Magenta, actor and writer David Bloom of Felix Culpa and actor and co-producer of The Flame storytelling events at Cottage Bistro, Joel Wirkkunen.

Much like the Thesaurus-laden sleaze, painfully earnest ramblings and cringe-worthy crap that inspired it, Gladstone, who called Bynoe a whiz with ideas, hopes Say Wha?! will live on. “Because there’s a lot of bad writing out there,” he said.