The Rewind Button is a group blogging project instigated by Rachel Tynan. As part of her New Years’ Resolutions for 2012, she set out to listen to Rolling Stone’s top 50 albums of all time. Rebecca Stevenson thought it would be fun if a group of bloggers listened to the same albums at the same time, then posted their reactions. The Rewind Button is the group of bloggers who are going through the Top 40 and posting about a new album every Thursday.

This post is overdue. Thanks to starting a new job and Easter. 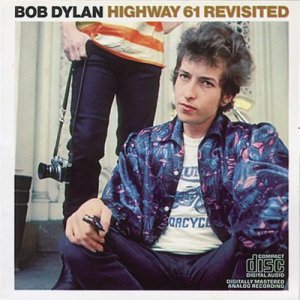 When I think of Bob Dylan I think of every hard to understand, harmonica playing, Ray-Ban wearing, cue card flipping, impression ever done of this legendary singer-songwriter.

I think about the movie Walk Hard: The Dewey Cox Story.

I think of Forrest Gump and the scene when the “You can sit here, if you want to” girl sings naked at a strip club.

Listening to an entire Dylan album opened my eyes to what the real Bob Dylan actually sounds like, yet it was parody confirming.

This album made me feel sad, lonely, old, frustrated, and it confirmed that I am living in a much different time than 1965, when this album was released. Gone are the days of revolutionary music (Ballad of a Thin Man). Gone are the songs with only verses and no chorus (Just Like Tom Thumb’s Blues).

Listening to this album was a challenge, but it wasn’t because of Dylan’s nasal, untrained voice. For me, it was the durational mono-rhythms that put me to sleep (Desolation Row). I knew the lyrics were supposed to be important and that Dylan is often called ‘a voice of his generation,’ but to my ear the monotony of his voice and the repetitive rhythms numbed my attention robbing me of the narratives I wanted to hear.  .. sort of.

Possibly because I’ve been busy settling into a new day job, I had a hard time listening to this album in one sitting. At the time of writing this review, I probably listened to each song a few times and instead of hearing the nuances of each song and having them grow on me, I recoiled more than the last time. Perhaps I’m just never in a Bob Dylan mood. This might help explain why that is: my all time favorite song is Deee-lite’s ‘Groove is in the Heart.’

Other Rewind Button bloggers in this series who probably paid more attention to this album than I did are: