What do you do when the lights come up, the music stops, the drugs have worn off, it’s 2005 and you’re the last raver dancing?

Sparkle Bunny: The Last Raver Dancing is a play that explores just that question. What happens when you are involved in a scene that is no longer cool? Why would you stay in it for so long? What will make you stop dancing… or should you?

Sparkle Bunny, with the help of her sidekick Bunny Bear, hosts her own rave in one last attempt to bring the scene back by spreading her P.L.U.R. around and creating the ultimate ‘vibe.’

This play is a comedic clown-like piece that will have you laughing and contemplating the real meaning of Peace, Love, Unity and Respect.

Originally created while Sara was at Studio 58, the show has since been performed and workshoped with Sage Theatre in Calgary and at the Victoria and Vancouver Fringe Festivals.

Sara Bynoe has a great comedic talent reminiscent of Carol Burnett. I’d expected her show to be good-she certainly has the chops-but I didn’t expect to laugh to the point of choking. Her portrayal of the eternally stuck-in-the-’90s raver Sparkle Bunny was endearing, grounded and specific. The great part is that you don’t need to have participated in the rave scene to appreciate her show. Mikey (played by the stage manager Joel Etkin) was the epitome of sarcasm; his pathetic and bitter delivery was great. My one complaint with the show was that her venue, The Canvas Cathedral, is a cavernous, cold space with no soul. A show like this needs a good vibe love space and the tent just plain sucks. You could cut the irony with a credit card when Sparkle Bunny said in reference to her rave warehouse: “I kind of hoped for a better venue.” Her bacchanalian sugar frenzy is worth its weight in pop rocks and the finale is sure to make you bust a gut, especially if you despise lululemon poseurs like I do. Terminal City , JENNIFER FLYE (note on the venue- in the 2005 Vancouver Fringe Festival decided to put performers in tents, my tent was in a big parking lot and basically sucked everyone’s will to live).

Sparkle Bunny on wearing so much glitter:
“I think everyone is attracted to sparkles. Even animals collect shiny things. Crows do it. Rats…magpies…DRAGONS! It’s mesmerising; glitter. You can’t have a bad day when you’re wearing it. When it’s grey outside and you are shiny the world shines with you.”

Sparkle Bunny on the way her friend Jojo dresses:
“At first I thought he was just dressing like that to get attention but then I realized it was his soul turned inside out and covered with fun fur.”

Sparkle Bunny on what time it is:
“It’s party time!” 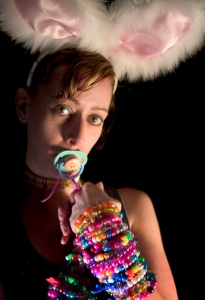